I know that we only just met a couple of days ago, and I do honestly hate jumping to conclusions, but I have to be honest with you.  What we have going on right now isn't going to work out.  Yes, I know I should give you a chance, but you've had a couple of those already.

Take yesterday for example.  You (being Monday that day) and I (being Peter, as I normally am) thought a quick jaunt to the gym would be fun.  After all, my studying was done, my rehearsals were over, and my friends were there waiting to play volleyball.  I know I'm not very athletic, and I know I only go to the gym once every couple of months, but seriously?  My plan was to play a couple of games of volleyball with my friends.  Your plan, which seems to have been the one that manifested, involved ending the night with an odd sort of crunching/popping sound coming from my ankle, which, as it turns out, was the sound of one or more of the ligaments in my ankle tearing.  You missed my bones though, if that's what you were going for.  So... thank you Monday, I had fun, but let's not do it again.

As I was (quite understandably) upset with you after that, This Week, you decided it would be good to approach me as a day named "Tuesday," as Monday and I clearly did not hit it off too well.  Well, This Week, let me tell you... you didn't fool anyone.  What I think tipped me off was when you decided to throw all of my keys into the toilet and flush them into the netherworld.  In those three short seconds, you managed to lock me out of all of the residence halls on campus, my own dorm room, my work (where my clarinet is stored, so I guess that's off limits too), heck, you even locked me out of the hallways leading to my work, and, ironically, the clarinet reed room (which is ironic only because I just put that key on my keychain...  ah... in the presence of Sunday, when you first wandered into my life).

Honestly, This Week, I know the ankle thing was kind of humorous a little bit, and the key thing was definitely funny (although those keys are $50 a pop...), but if this is how you're going to treat me, I think we're going to have to go our separate ways.  I'm sure you had grand plans for my date with "Wednesday", but I think I'll pass.  It has been suggested that you have plans to hit me with some well-aimed bird poop, but I will have none of that.

I either want a re-do, or I'm hibernating until Next Week comes around... 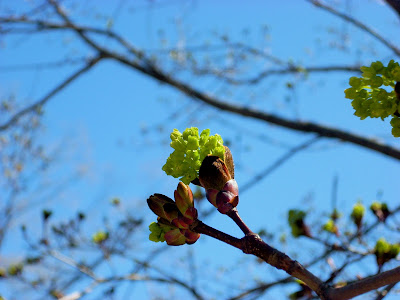 I Would Be Amused, Except...

...except I'm tired, cranky, and over-stressed. 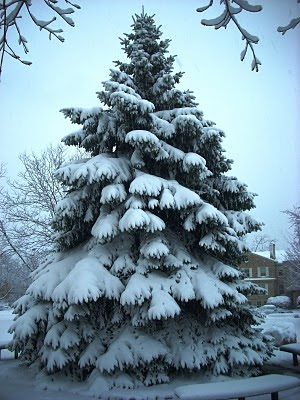 So instead of being amused, I am just plain upset. 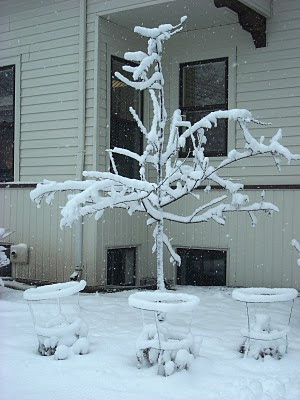 I would think this is beautiful, except... 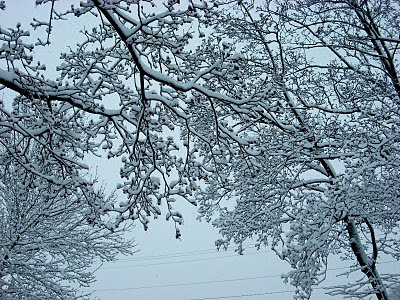 ...except today is actually April 8th and not January 8th. 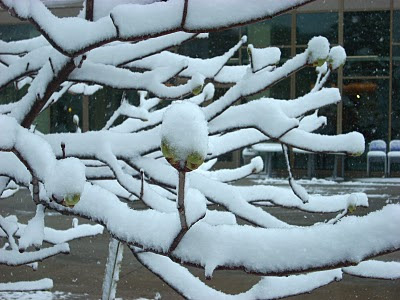 Come on Spring, you were doing so well!  Stand up for yourself, would ya? 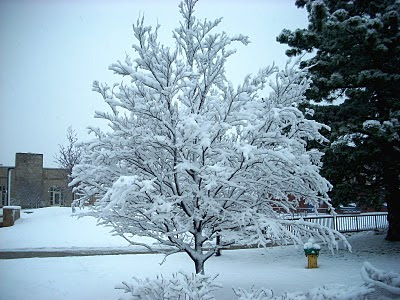 Stopping In For A Bit

How nice it is to have warm weather again!  Spring is slow to appear here in Wisconsin, but there are sure signs all around.  Birds are returning, the grass is growing again, the weather is slowly warming up.

I used to be unappreciative of Spring - what a ridiculous notion!  How could I not revel in the warmth, be inspired by the rebirth of new life all around me, stand in awe as I think about the long journeys of migratory birds?  I can't say I took Spring for granted... I am, after all, a Minnesotan... but these past few years I have looked forward to it more and more.

I wish that Spring had the power to return life to my knitting as well.  It seems to have gone into hibernation and is too stubborn to be awoken by the beautiful birdsongs.  I have started a new semester (trimester, really - my last as an undergrad!) and find little time to do any knitting.  My senior recital is on April 10 and I have been spending every spare minute I have practicing and preparing for that.  I hope that once it's over, I might have a bit more time to get back to my knitting.  My course load this term seems entirely manageable and my classes are incredibly interesting, so I find myself in the library studying even when I have already completed all of the assigned reading for that day (dork, much?).

As far as knitting goes, Evenstar has stopped growing.  I haven't worked on it since the middle of March.  I have only knit two of the four clues that have been published so far. 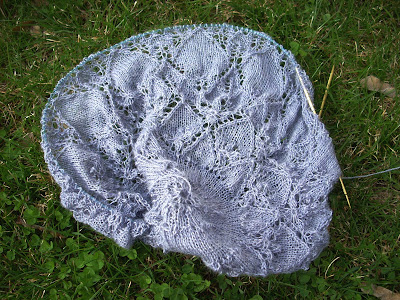 There is just something about it that's off for me.  I can't put my finger on it though.  This is just one of those projects that I am not overly consumed with a desire to knit on it all day every day.  The yarn is absolutely wonderful (you can't argue with silk, alpaca, and cashmere).  I honestly think it may be the needles.  I'm using Addi lace needles for this, and I just don't know if they're my favorite.  Also, because the yarn is made with somewhat inelastic fibers, the yarn doesn't have much spring to it, which I think also adds to my feeling that something isn't quite working.  And to be completely honest, I don't think this pattern is that great.  There, I said it.  I really can't be too critical as I know that I can't design something like this, but for me, I don't know if I'm going to be happy with the end results.  I'm thinking about ripping it and using the yarn for something else, but I'll give it a bit more thought before I do that.

Of course, there is a project I have on the needles that I do love to death and want to knit all day every day.  It would be the long-lost Autumn Arbor Stole by Anne Hanson. 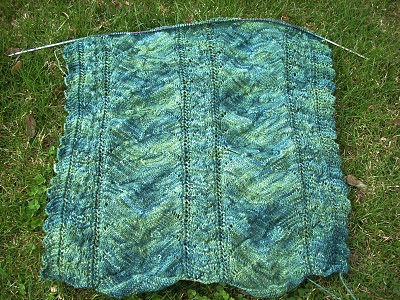 I started this shawl back in June '09 using the recommended yarn - The Woolen Rabbit Whisper Merino Laceweight - gifted to me by my sister for my birthday along with the pattern (they came as a kit).  I'm using the Mystic Mountain Pine colorway (I think) and it is absolutely gorgeous.  I don't think you can tell in this picture how many colors there really are in this hand-dyed yarn.  I love knitting each and every single stitch just to watch the colors flow through my fingers.  The pattern itself, as I tend to expect from Anne Hanson, is deceptively easy and entirely intuitive.  I have to ask though, do the colors look splotchy or pretty?  I can't decide.  I have a feeling that when it's all blocked out it'll look better (and the pattern won't be as obscured).
Here's a close-up so that you can maybe see the colors a bit better: 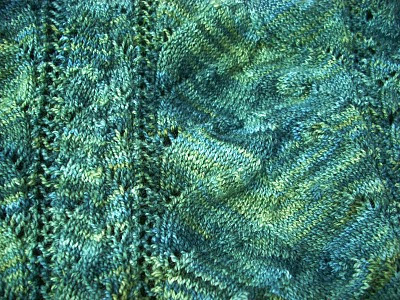 Really though, a picture just can't do this yarn justice.  It is absolutely gorgeous.
...and that pretty much wraps up what I've been doing.  I haven't touched any other projects, and haven't even knit an entire pattern repeat on the Autumn Arbor Stole, so I can barely say I've even been working on that.  I just had some spare time this afternoon (class got out early) so I thought I would blog to give you all a bit of an update about what's going on around these parts.
I just love Spring!
Posted by Yarndude at 4:16 PM 11 comments: