In a few days I'll be heading up to my family's cabin in North Dakota.  I've written about my cabin several times before on the blog (here, here, here, and here) and my incredible love for the sunrises and calm of being up there.  For the next week and a half I will be blissfully removed from technology - no tv, no computers, no cell phone service, and while I embrace this removal from the outside world, it means I have to be thorough in my plans for what knitting to bring with me.  I have to have my patterns picked out and printed, yarn wound, notions collected, and needles ready to go.  This trip is unusual in that while I'm there, I don't find knitting to be a necessity.  I could (probably) spend the whole week and a half without knitting and be just fine because there's so much more to enjoy while I'm there.  To begin with, I could watch the birds all day long.  I could spend hours and hours swimming in the lake, laying in the sun, playing cards, doing crossword puzzles, reading a good book, or indulging in a day of general laziness.  But there's always a significant chance that there will be several days of thunderstorms that leave me trapped in the small cabin with 12-15 other people and then, THEN knitting is not a question of how to spend my time, but a question of how to save my sanity.  So you see, despite the fact that I may not need it, knitting is in no way optional when it comes to packing for this trip.  (Not to mention it's a 10-hour drive each way.)

It's a little embarrassing to admit that I've been thinking about what to bring for a so long.  In fact, the other day I texted my sister:

You see, even a week before the trip I begin to panic that I might not be adequately armed with projects.  But now I think I have it narrowed down.  A few days ago I started Ashby so that I'd have it in the works for the trip.  For a project like this I like to have it at least started so that if there are any troubles with the pattern or yarn, I'll know about it before I'm in the middle of the North Dakota wilderness. 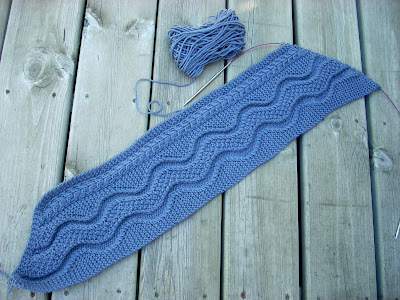 That's the first half of the border, but I predict that by the time I climb into the car, I'll have the border finished and will have preferably picked up the stitches to begin the body of the shawl.  (I'm knitting this shawl in Cascade 220.)

Then I have a lace shawl prototype in the works and I figured there's no better time to finalize the charts  than while sitting outside soaking up the sun and listening to the wind blow through the trees. 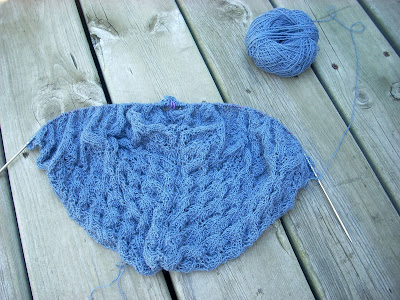 I already know the pattern needs to be tweaked, but that's what prototypes are for, right?

And although I know that both of these projects will provide more than enough knitting for the trip, I'll also be bringing enough yarn for two pairs of socks as an insurance policy.  I don't really knit socks, but I kind of like wearing them and I figured a long car ride or a rainy day at the cabin might force me to make some.  Socks will also be much more mindless than designing a lace shawl or knitting cables, so it will be nice to have them around.  And before you ask, yes, the yarn for the socks is blue.  Yes, both pairs.  I know what I like.

What do you guys bring with you when you're planning for a trip?
Posted by Yarndude at 3:54 PM 8 comments:

Despite the new yarn arriving for my next sample sweater, I managed to finish the yoke of my Icelandic sweater after all.  I swatched for the new sweater and then while I was waiting for those swatches to dry, I quick knit up to the neck of my own sweater. 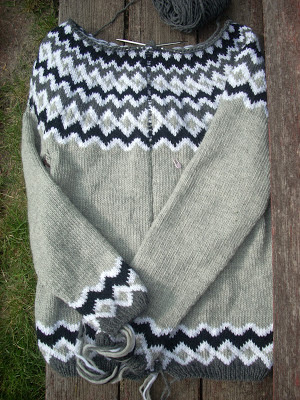 It seemed like a pretty reasonable stopping point now that the stranded work is done.  What's left now is to knit the neckband, cut the thing open, add a zipper and weave in the ends.  In short, the finishing.  I also consider this a decent point to stop because I don't yet know what I want to do with the neckline.  The directions in the pattern leave something to be desired and I think I'm going to have to play around a bit.  Due to the patterning on the yoke, there was no simple way to add short rows in the back to raise the neckline, so I may try to do some of that in the collar.  It's still to be determine, so I'll mull that over as I work on this next sample.

The sample, though I can't show you, is cruising right along.  Despite it being for a 44" chest, I'm about 1/3 of the way through.  Unemployment does have it's benefits, doesn't it?  I've also been zipping through audiobooks like candy and it seems to keep the knitting moving along.

When I looked out into my backyard this morning, I saw this little guy snoozing on my sidewalk. 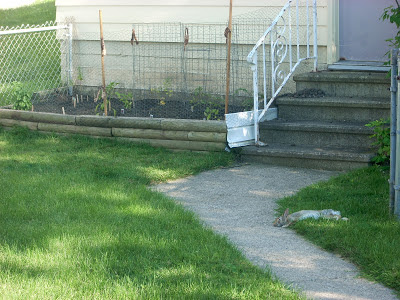 I think the bunnies feel safe in my backyard because it's fenced in and for years nobody has really gone back there other than to mow the lawn.  This was my grandfather's house and at 93 with his memory failing, the time came for him to be moved into a nursing home where he'll have people looking after him more closely.  Now I'm living in the house as we clean it out and getting it ready for sale.  The bunnies have free reign of the backyard, but now that I've fixed up the garden space by the garage (I'm sure it hasn't been used in at least a decade.  There was quite a bit of work to get it ready), I've had to make it clear that no bunny is allowed in that space.  Apparently now they just sleep next to it.  I can't blame them, though, it's quite peaceful back there.  (And I have a habit of feeding them lettuce...  how's that for mixed signals?)
Posted by Yarndude at 11:14 AM 4 comments:

I thought you would all enjoy a few more pictures from the alpaca farm.  Babies are arriving almost every day and it is a very exciting time at the farm. 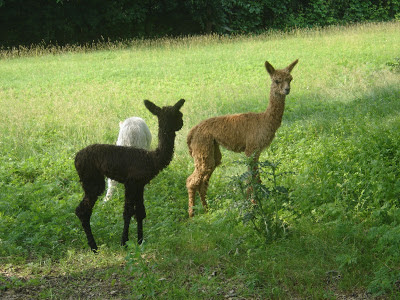 The last time I was down at the farm (on Sunday), there were nine babies and I know that at least one more has arrived since then.  Each one really has its own personality! 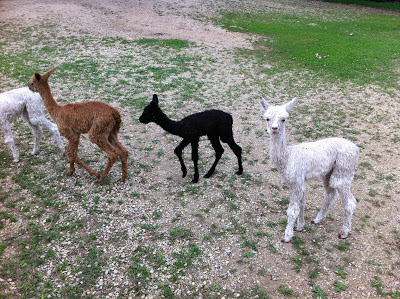 That little black one is the smallest of the group, but he's quite a handful.  He's like the little dog who isn't aware of his size and challenges every German Shepherd that walks past. 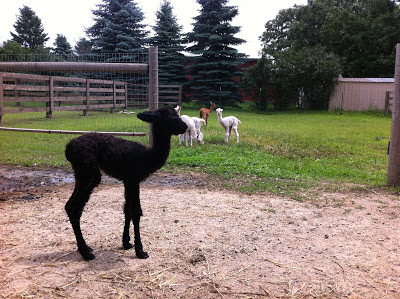 We call him Oh, Henry! because he is such a handful (his mother is named Skittles and that lineage is all candy bars).  That won't be his documented name, however, because his mother had previously been sold and the new owner will have to choose a name for this little guy. 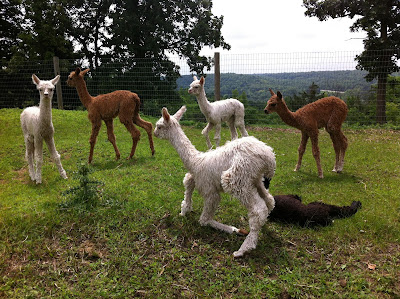 You can tell these babies have a lot of energy and they are so much fun to watch!  They have the same carefree nature as human children and I admit it's very entertaining to watch them stumble around as they get used to running, prancing, and playing. 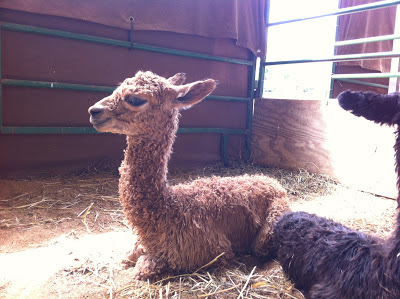 That little brown girl is such a beauty and I'm sure she'll be a show girl next year.  Just look at how curly her fleece is!  And aren't those eyes the most adorable things you've ever seen?  And just look at one of the most recent arrivals: 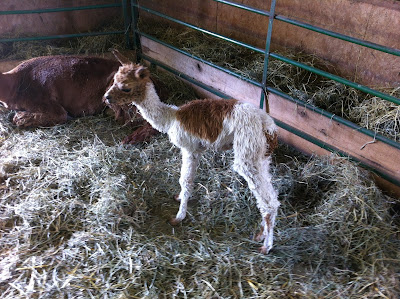 What a surprise!  The other babies are all pretty solidly colored - one white one has beige ears and a brown one has white legs - but none of the others have big splotches like this one!  I told the farmer that if he's not suitable for the show ring, I'd be happy to take him off her hands.  He comes from one of my favorite families, too - his mother's name is Symphonie.  (That family also has Melody, Harmony, Aria, Rhapsody, and probably some that I'm forgetting.)  I'm sure I have room in my back yard for him. 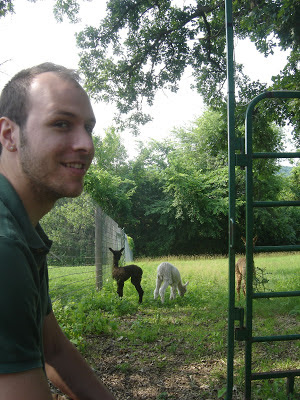 And here's Harvi, the friendliest guard llama you'll ever meet. 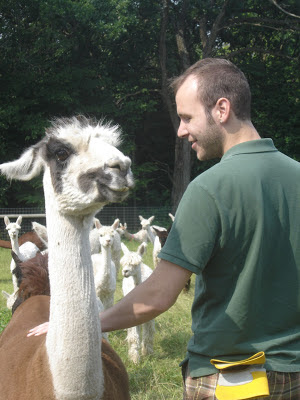 She loves to know what's going on at all times and it seems her favorite thing to do is to interrupt conversations by standing in between the two people talking.  All the alpacas know that she can protect them, though, so they have a habit of hiding behind her when they're unsure about anything in the field. 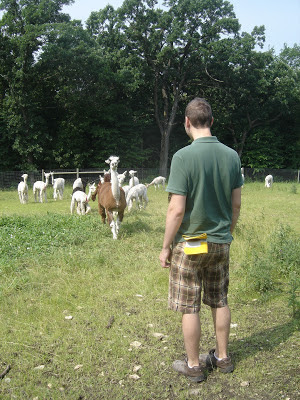 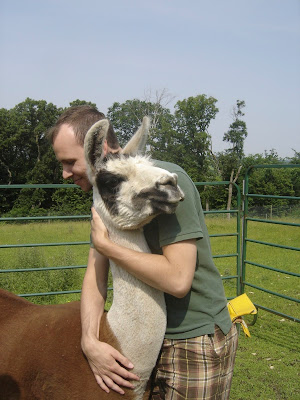 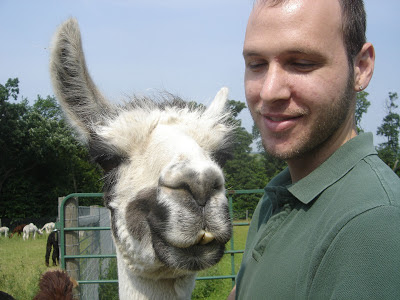 I really could spend all day every day at that farm.  I don't think I'll ever grow tired of it! 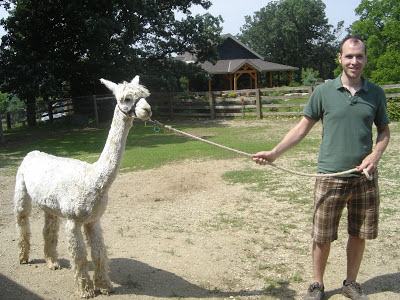 Shall we look at some knitting now?  I thought you'd like to see what my Mountain Peaks Shawl looks like now that it's blocked. 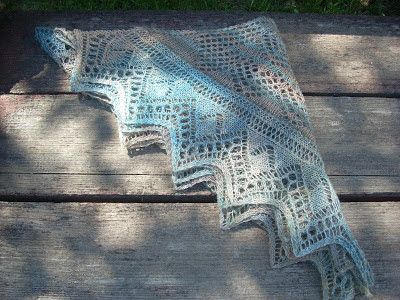 It really blocked nicely and has the perfect combination of drape and springiness. 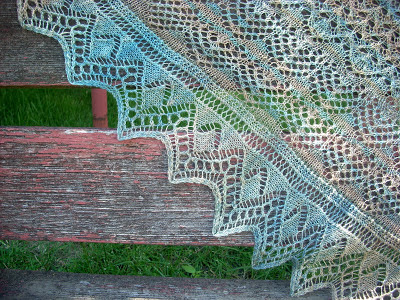 And I think using handspun gave it a great amount of character, too.  Remind me to knit with my handspun more often!  I think I get into the habit of considering a skein of handspun to be finished once it is washed and dried, but I really need to follow through with the next step - knitting! 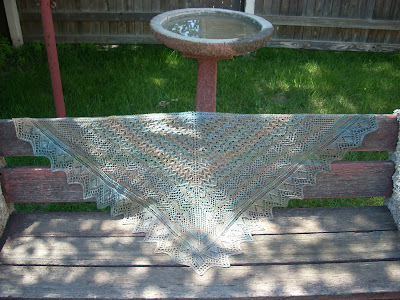 I'll have to save this one to give as a gift sometime in the future.  I'm sure I can find someone who'll love it. 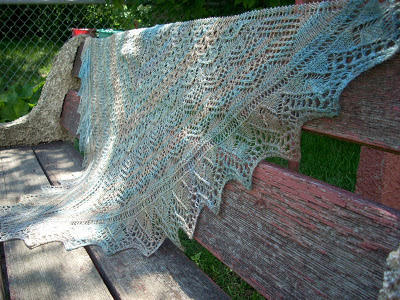 And my Icelandic sweater is coming along nicely, too.  I was trying to knit it up as quickly as possible because I have some more sample knitting to do, but I didn't quite make it to the finish line.  The yarn for the next sample sweater arrived today and I still have much of the yoke to finish, so I'll have to set it aside for a bit, but I'm eager to see the finished product. 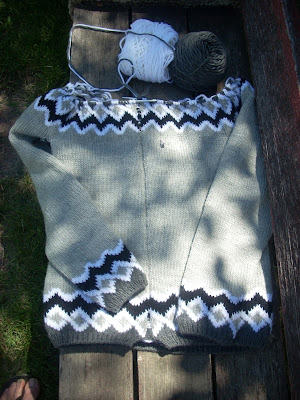 I tried it on today, though, and I really love the way it's fitting so far!  This is definitely in the running to become my favorite sweater, but I tend to think that about each new sweater I knit.  Only time will tell!

Happy 4th of July to everyone in the US!  Don't do anything stupid with fireworks, mmmkay?
Posted by Yarndude at 5:09 PM 4 comments: