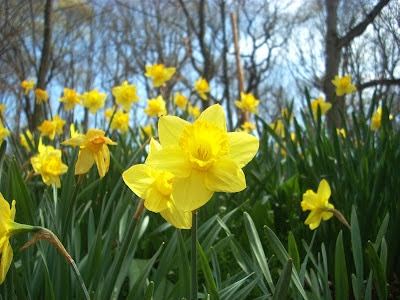 I believe it might be time for another update.  In short, it goes like this: lots of clarinet, a little spinning, no knitting.

As my final semester in graduate school progresses, each day gets busier than the last.  Days, weeks, and months seem to fly by at the blink of an eye which is entirely disconcerting considering how much I need to get done.  Every week I find myself thinking, "It's Monday again??  That can't be possible!  Didn't Monday just happen?"  And now with the month of April peeking around the corner, things are really going to start to get hectic. 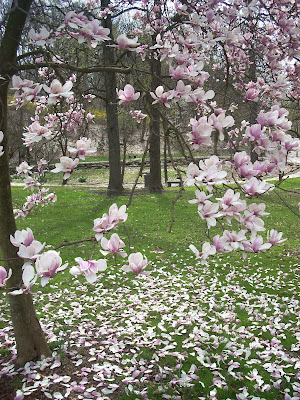 I'll be traveling to New York with my school's orchestra and choir this weekend to perform at Carnegie Hall.  As exciting as that may be, it means that two entire days will be devoted to riding on a bus, which in turn means that there are two whole days that I won't be able to practice.  I know, it sounds insignificant, but like I said  - there's a lot to do.  My graduate recital is only a few weeks away and although I'm sure I can afford to take a day or two away from practicing, I have an irrational fear that if a single day goes by in which I don't practice, I won't be prepared.  This notion, of course, is preposterous considering the fact that I have been learning this music for the past, oh, six months.

If any of you are interested, my recital will be webcast online and I invite you all to tune in and watch!  It should be loads of fun.  The recital is scheduled on Saturday, April 14 at 5pm EST, so mark it in your calendars and then all you have to do is go to destination.cfa.cmu.edu and there will be a link 15 minutes prior to the starting time that you can click on.  Easy peasy!  I'll try to post another reminder in a few weeks if any of you are interested in watching. 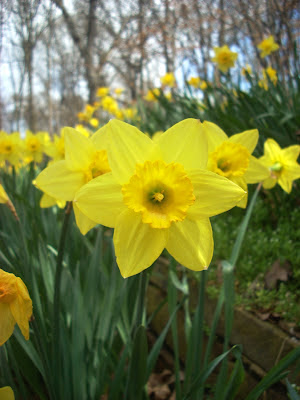 So that's what's going on with the clarinet, but I know most of you are here to read about things fiber-related.  It just so happens that I do have a few things to show you, and more waiting in the wings!  No knitting, mind you, but my spinning wheel and I continue to become better acquainted.

I finally finished spinning up those Cupcake Fiber Company batts from Joan.  I started them eons ago and, well...  You know how if you're knitting on a project, but then you put it down for, say, four months and then pick it up again and finish it only to discover that your gauge was completely different for the second half and it doesn't really resemble the beginning at all?  That's what happened with my spinning.  Only, I sort of knew it was happening and didn't do anything to fix it.  When I spun the first batt, I spun it using worsted techniques, which really just means that I was producing a relatively dense, smooth single that didn't have a lot of loft or bounce to it.  The trouble is that I don't particularly care for that type of spinning.  To my impatient self it takes too long and that type of spinning doesn't necessarily produce the bouncy, airy, warm yarns that I love.  Also, I find that if I spin that way for longer than, say, half an hour, my eyes get really tired and I spend the rest of the day with a headache.  (Some will suggest spinning with better lighting.  Believe me, I have tried.)  This is all to say that by the end of the sixth and final batt, I was spinning in a way that didn't even begin to resemble what I started out doing. 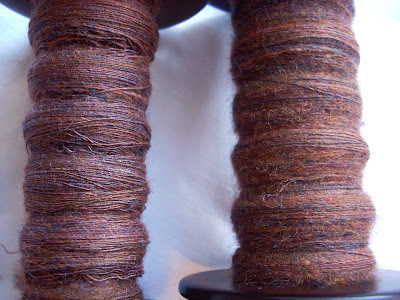 Do you see how the bobbin on the left is much smoother and the individual strands are more defined?  That was my first bobbin.  The one on the right is much loftier and has much more of a halo to it, which gives it that softer look.  "Oh well," I said, and plied up my yarn to see what would happen.  I spun six one-ounce bobbins, so I plied together bobbins 1,3, and 5 and then 2, 4, and 6 to make two skeins of 3-ply yarn. 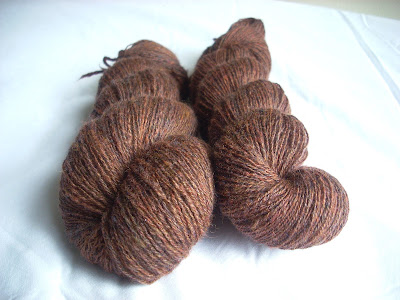 Really they're not bad considering my complete disregard for consistency in this project, but you can tell that the skein on the left is a bit loftier than the one on the right (on the left is skein 2,4,6.)  At any rate, I do love the finished result and can't wait to get my hands on some more of those batts.  And this time I know how I like to spin them up.  These two skeins total about 870yds.

Once that yarn was off the bobbins I started spinning up some fiber that I picked up at my LYS.  The fiber was from Frabjous Fibers and was a combination of 65% merino and 35% sparkle in the Redwood Forest colorway.  (I put "sparkle" in italics because that's how I say it - with a bit of flair.) 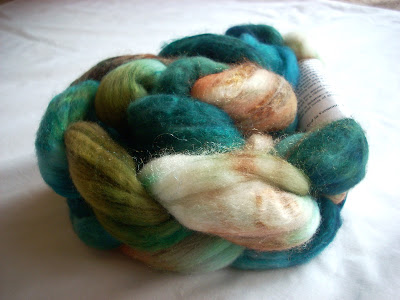 I have to say, this was a pleasure to spin up.  I didn't really have any plans for it other than trying to get a slightly larger yarn.  I split the fiber in half and then just spun up two bobbins and plied them together.  Super quick and super fun. 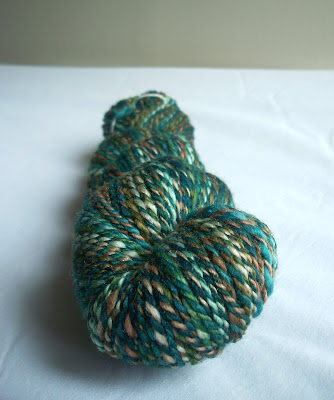 The singles weren't incredibly consistent, but that doesn't bother me even a teensy bit.  The finished yarn is soft, squishy, and - in the right light - quite shiny as well.  With 230 yards it's perfect for making some whimsical little accessory, but for now it sits in waiting.

I always find myself looking for my next spinning project as soon as I finish the last one (much as I used to do with knitting.  ::sigh::) and the next project on the wheel was some hand-dyed Hampshire roving from Dan at Gnomespun that I got as part of his Mythic Fibers Club.  For this club he would take a mythical being and create a colorway that he thought would be represent that character.  The braid I chose to spin up first is based on The Dagda from Irish mythology. 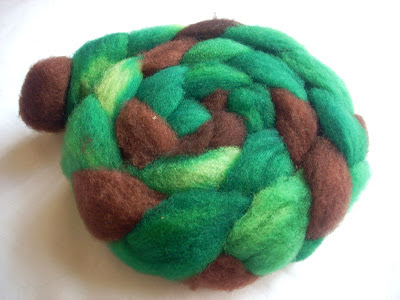 I just plied up the yarn last night, but haven't wound it off the bobbin yet.  Once again I split the fiber in two and spun up two bobbins of singles.  The prep of this fiber lent itself very well to spinning long-draw, which I am beginning to suspect is my preferred way of spinning.  The resulting yarn is going to be seriously bouncy and warm, just you wait.  I'll have to save that for next time, though. 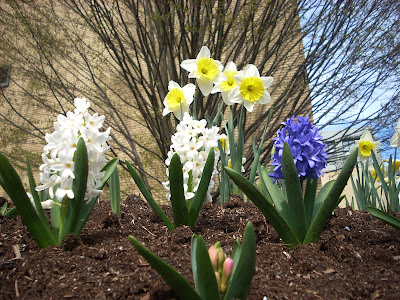