I've been getting messages lately from people asking me if everything is ok or if I'm still alive.  (Fluffbuff, I don't seem to have any way to contact you, which inhibits my ability to reply to your emails.  I'd love to be able to do so.  If you'd be so kind as to email me at yarndudeknits AT gmail DOT com or send me a message on Ravelry with your email address, I'd finally be able to reply to you!)

I didn't realize that so much time had passed since I last blogged.  Quite a bit has been happening around here as the year is quickly coming to an end and everything, as always happens, seems to be happening at the same time.

I feel like I've been performing every other day around here (which may be a little bit true).  I even found myself playing a concert at the Kennedy Center in Washington, DC, but I was only there for about 18 hours and didn't actually see any of the city (it was rainy and foggy.  Where are those famous monuments, anyway?)

The bus ride did allow me to do some knitting, though.  Just in time, too, as my friend's birthday was on April 7th and I wanted to get these things to her as quickly as possible.  (Hmmm, the DC trip must have been the weekend of the 8th, then.) 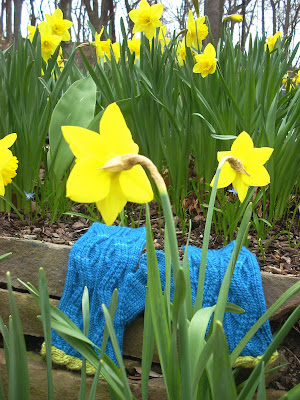 Also while I was off not blogging, Spring seems to have happened.  It's a bit of a shame because those are mittens and mittens are not needed in the springtime. 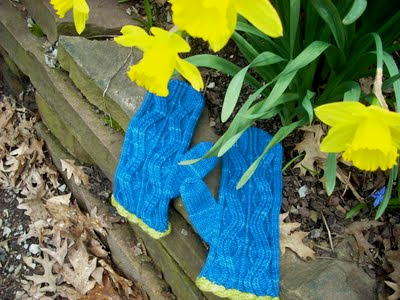 However, I think they sort of look like Spring, and that's gotta count for something, right?  The pattern is Clepsydra by Kirsten Kapur and I knit these ones using Malabrigo Worsted in Tuareg (with a bit of Lettuce for the cuffs).  It's not the most practical yarn choice for mittens, but I couldn't help myself.  I started them back in February when I desperately needed some Malabrigo in my life and the colors gave me hope that Winter would eventually be over. 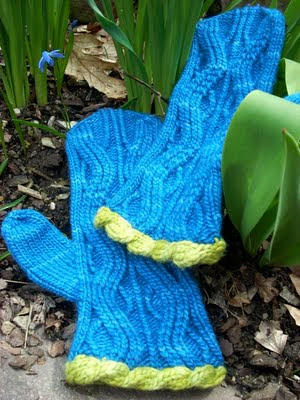 I should have known that Spring was just waiting for me to finish these mittens.  I apologize to everyone who was waiting for Spring to come, it's my fault.  (Also my fault was the last snowfall.  I may have said something like, "I think we're in the clear.  Spring has to be just around the corner..."  I know, I totally shouldn't've, but I can't take it back now.  I already apologized (out loud) to the whole city of Pittsburgh.  Oh well, that's in the past now.)

Because mittens no longer seemed to be the perfect gift I thought they would be back in February, I also had to include something that might still serve some sort of purpose before next October. 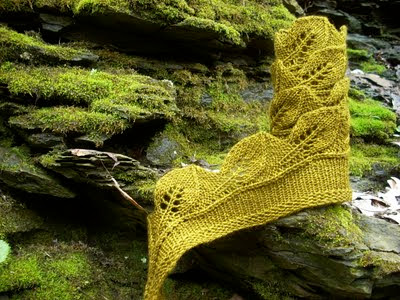 I had a skein of MadTosh Sock in my stash in the colorway "Oak" and, well, the Cedar Leaf Shawlette was a natural candidate for a pattern.  The pattern actually calls for a DK weight yarn, but I clearly didn't care. I think it worked out just fine and the recipient loves it. 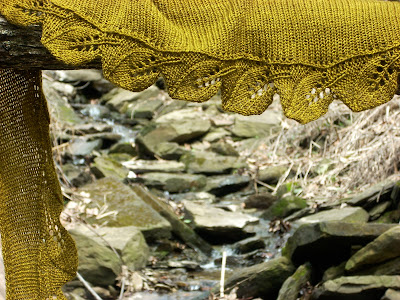 But how could anyone not love those leaves?

With two weeks left of class, I am going to disappear from the blog (and knitting, sadly) again for a bit, but expect me back in the beginning of May with some new projects!